Understanding the Basics of Appeals in NJ

Can I Appeal my Case in New Jersey? 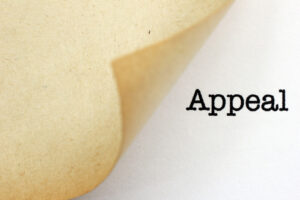 An appeal is when you or your attorney seeks a review of the finding or decision in your case by having a higher court review it. Notably, the highest Court in the United States is the Supreme Court and most think that this is the place where your matter on appeal will be heard. Cases heard on appeal in the Supreme Court are usually considered a last resort and what is actually heard there is on a much smaller scale compared to what the Court is requested to examine. In fact, the Supreme Court only hears approximately 100-150 cases per year compared to the 7,000 cases it is asked to review. There are many steps to be taken before you can get your case to the Supreme Court of the United States. Each Court has the jurisdiction to hear particular types of cases, and most have appellate jurisdiction to review cases from the court below it.

The Superior Court will hear cases that are being appealed from a Municipal Court, while the Appellate Division of the Superior Court reviews cases that you are appealing from the Superior Court. Subsequently, any appeals from cases at the Appellate Division would be reviewed by the Supreme Court of New Jersey. From there a writ of certiorari may be filed to petition review by the United State Supreme Court. It is important to note that there are also different steps with cases at the federal level. In New Jersey, these cases are initiated in United States District Court for the District of New Jersey and would be appealed to the United States Court of Appeals, for the Third Circuit.

As you can see, the appeals process is different depending on the type of case at hand. As such, it is critical to strictly adhere to any timeframes that are imposed, or your case may not be able to proceed. Further, contingent upon the place where your case is initiated and heard, this will be the deciding factor on where the appeal for your case will be. It cannot be emphasized enough how important following the specific requirements for appeals can be. In many scenarios, it is the difference between having your case heard or not.

Common Kinds of Cases that can be Appealed in NJ

Can You Appeal a Restraining Order Decision?

Let’s start with restraining order cases. Temporary Restraining Orders are generally initiated through the Superior Court or after hours at a local Police Department and decided by a Municipal Court Judge. Temporary Restraining Orders (“TRO’s”) remain temporary until they are listed for a Final Restraining Order Hearing and decided upon. If you are denied a TRO, you may make an application to the Court for a review of the denial. Subsequently, the judge will review the matter and determine if the denial was proper or if it was improper by refiling the complaint before a Superior Court Judge on an emergent basis.

Once a temporary restraining order is granted, the first listing of a final restraining order matter occurs approximately within 10 days from its issuance. From there, if a resolution has not been found between the parties (for example, entering a civil restraints agreement and dismissal of the temporary order), there will likely be a trial. During the trial, it is the plaintiff’s burden by preponderance of the evidence in showing that an act of domestic violence has occurred, and a final restraining order is necessary to be protected. As a plaintiff or defendant in these matters, you are presenting your argument before the judge that will be deciding the case. Consequently, you must support your argument and either meet the burden of proof as a plaintiff, or, as a defendant show the Judge that the plaintiff did not meet his or her burden. The Judge will be the decision-maker on whether the restraining order should be granted.

An appeal becomes relevant if, for example, the judge found that a restraining order should be granted or denies the issuance of the restraining order against the defendant. Appeals do not just happen because you think a judge made a bad decision. A restraining order appeal must occur within 45 days from the date of entry of the order or the denial of the order. Moreover, there always must be a justification for filing an appeal. Particularly, the grounds for an appeal are abuse of discretion, or misapplication of law or facts. Thus, a higher court will use particular standards to review the court’s decision and either decide on the matter or remand it back to the lower court for further proceedings. As a result, your case will not be relitigated. Instead, the transcripts and facts will be reviewed under the lens of a higher court with the same information the lower court had to make its decision. However, the attorney will supplement or emphasize why the Court should decide differently based on specific reasoning through highlighting the relevant law or facts.

It is important to have an experienced attorney handle a restraining order appeal because it is not easy to overcome the finding of a lower court without the skill and legal knowledge to accurately do so. Appeals from FRO hearings usually occur through filing a Notice of Appeal, providing a legal brief with a strongly articulated legal argument, and strictly adhering to filing deadlines.

Can You Appeal a Gun Permit Denial?

In New Jersey, a denial for a gun permit can occur for a variety of reasons. For one, it may be a result of a final restraining order that has been issued against you. Pursuant to The Prevention of Domestic Violence Act, both state and federal laws prohibit possession of firearms if a defendant is a party to a restraining order. This even means that you could be denied a gun permit if the restraining order was dismissed against you. In bringing an appeal, you would be asking the Court to reevaluate the denial. The timeframe for an appeal is usually within 30 days of the denial of your gun permit. For restraining order cases, showing that the matter was dismissed could have great weight on the Court ordering the Police Department where you were denied to issue the permit. It is not an easy process to appeal the denial of a gun permit and requires evidentiary support, and a persuasive showing to the court that the applicant should be granted the permit. Remember, you will be going up against a Prosecutor for the State that most likely will be arguing for your continued permit denial. That is why it is important to be prepared and also keep your expectations realistic when appealing a gun permit denial.

Particularly, you cannot expect to show the Court an Order of Dismissal for your restraining order and expect to be permitted to have a gun permit. There are a lot of elements you need to have a persuasive argument. Primarily, within 30 days of your denial you must file a Motion For a Gun Permit Appeal pursuant to N.J.S.A. 2C: 58-3. The appeal paperwork is sent to the Superior Court, the Prosecutor’s Office, Chief of Police of where the denial occurred, and the Superintendent of the New Jersey State Police. Beyond the initial paperwork there is a great deal of expertise involved to prove you are qualified to own and possess a firearm. Depending on the circumstances of the denial, you may need an expert to review the case and ensure you are mentally fit or there may be further evidentiary support required. Since this is a trial, you must be in the position to present a convincing argument. Other reasons for a denial may be a result of a felony conviction on your background and more. Much of your advocacy will occur on the record with the judge since the paperwork for an appeal of this nature is usually just a Notice of Appeal. Thus, it is essential to have a strong defense prepared.

Can You get Weapons Back in a Domestic Violence Case?

When you are involved in domestic violence cases, under state and federal law your firearms may be seized. This most commonly occurs with cases involving the issuance of a temporary restraining order. As such, your firearms may be taken in connection to domestic violence charges or the issuance of the restraining order complaint. Upon the seizure of the firearms, it is the State’s discretion to file a forfeiture action of the firearm(s) within 45 days. Then, within another 45 days a hearing will be held. If the Court finds in favor of the State, you will have 45 days from the Court’s decision to file an appeal. Despite the overarching notion that forfeiture matters are criminal cases because of the State Prosecutor’s involvement or criminal case involvement, forfeiture cases are civil matters. These matters are serious because your firearms could be taken permanently. Accordingly, you need to effectuate a skillful defense.

Can You Appeal a DWI Conviction?

A notice of appeal from a decision within the Municipal Court must be done within 20 calendar days of a finding of guilt. Just like the foregoing examples, the Court will look at what is on the record and you will not have the opportunity to relitigate your case. From there, if the decision of the appeal is still not favorable based on the facts and law previously presented, you may also appeal again with the Appellate Division within 45 days from the Court’s decision.

Do I Need a Lawyer to Help with Appealing my Case?

As you can see, the timeframes for filing appeals are crucial and the venues for filing appeals are equally as important. Depending on your specific case will determine how long you have for an appeal. Accordingly, the legal reasoning coupled with the facts of your case are the elements that will determine the success of your appeal. Contact the Morristown law office of The Tormey Law Firm at (201)-355-5385 for a complimentary consultation to discuss the merits of your appeal today. You can also request a free consultation online and a lawyer skilled with handling appeals will get in touch with you right away.

« DUI Checkpoint Charges in New Jersey
How can I get a Shoplifting Charge Dismissed in NJ? »