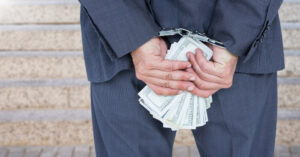 Money laundering is generally understood as a way for someone to take money they’ve earned through illegal activity and “wash it” so that it appears to have come from legal activity. It is also considered a money laundering offense when someone helps or facilitates another person’s attempt to conceal the criminal activity that generated the funds in the first place. If you face money laundering charges in New Jersey, the consequences could be devastating. Money laundering may be considered a white collar crime, but don’t let that fool you. A conviction on money laundering charges can result in severe penalties that land you in state or federal prison for a very long time. Both the New Jersey state and federal government seek to discourage others from committing similar money laundering crimes in the future by imposing extensive consequences on those found guilty of concealing or otherwise financially gaining from funds and profits of unlawful activity.

If you have been charged with money laundering, accused, or are currently under investigation for financial crimes, contact the aggressive and tactically skilled criminal defense lawyers at our Morristown criminal law office as soon as possible. We defend clients facing money laundering allegations and related crimes such as forgery, fraud, and drug trafficking. To talk to a lawyer about your money laundering case in Parsippany, Denville, Florham Park, Roxbury, Madison, or elsewhere in Morris County, call (908) 336-5008 or begin by contacting us online for a free consultation.

What Charges can You Face for Money Laundering in New Jersey?

The goal of a money launderer is typically to try to hide the real source of their income by making it appear as though the cash was generated by lawful means when, in reality, it was generated by criminal activity. This kind of deceit is highly illegal, and there are both federal and NJ state laws that explicitly prohibit anyone from laundering money through legitimate businesses when the source of that money was an illegal undertaking such as drug distribution, identity theft, or insurance fraud.

Criminal charges for money laundering in New Jersey are addressed by statute section N.J.S.A. 2C:21-25 of the NJ Criminal Code. There are three (3) different acts that are considered money laundering under the statute:

Elements that Must be Proven in an NJ Money Laundering Case

In order to secure a conviction on money laundering charges in New Jersey, the prosecution will need to establish certain elements beyond a reasonable doubt. What elements must be satisfied to prove the case? First, the state must establish that there was an underlying criminal act, such as an illegal drug enterprise. Second, the criminal conduct must have generated some type of proceeds, whether it was real property, money, or something else of value. Third, the prosecutor must prove that the defendant was involved in an attempt to hide the true source of the proceeds. And lastly, the final requirement is that the defendant either knew or should have known that the property came from unlawful activity. This is the aforementioned “reasonable person standard.” It means that the prosecution does not necessarily need to show that the defendant had actual knowledge of an illegal act. Instead, the prosecution merely needs to establish that the defendant’s involvement in the “washing” of the money was unreasonable based on the information that was available to them at the time.

The exact penalties that a person may face for money laundering will vary, depending on the amount of money involved (or the value of the property involved), as well as the underlying crime. Under the NJ criminal statute, the various ranges of penalties are fairly straightforward because they tend to be determined by the amount of money that was laundered:

It is important to understand that the amounts involved in different aspects or acts committed as part of a money laundering operation can be combined, so that the aggregate or total amount is used to determine the degree of the charges. Additionally, judges may impose consecutive sentences in money laundering cases. This means that if you are convicted of both an underlying offense (e.g., drug distribution or theft by deception) and a money laundering offense for trying to hide the source of funds generated by the underlying crime, you may face multiple prison sentences that will be stacked on top of each other.

In addition to facing a possible prison sentence, a defendant who is convicted or who pleads guilty to felony money laundering charges is also subject to a substantial monetary penalty. The exact amount of the monetary penalty will be determined by the degree of the charges or the value of the property involved in the money laundering offense. One option for the court is to impose a fine of three (3) times the value of the property or money that was laundered. Another option for the court is to fine the defendant based on the degree of the charges. These fines can amount to $500,000 for a first degree offense, $250,000 for a second degree offense, or $75,000 for a third degree offense.

Other Consequences of Money Laundering

Beyond the possibility of prison time and heavy monetary fines, there are other serious consequences that come with a money laundering conviction. For example, if the defendant is an immigrant or foreign national who is currently in the United States on a green card or visa, they could lose their right to remain in the country. A conviction on money laundering charges can result in the defendant being deported after they have finished serving any prison sentence imposed by the judge.

Money laundering is a felony-level offense, whether it’s charged at the federal level or at the state level. When facing charges of this magnitude, there is no time to waste in finding the most qualified criminal defense lawyer you can to challenge state or federal prosecution. Protecting you in the initial stages of the investigation, during the pre-indictment stages of the criminal process, and in the midst of complicated plea discussions is paramount if you want to maintain your freedom and your innocence. Contact the Morris County criminal defense team at The Tormey Law Firm if you need assistance and representation in a money laundering case. The attorneys serve state and federal criminal defendants in Chatham, Rockaway, Butler, Chester, East Hanover, Randolph, and other towns throughout New Jersey. Receive a free consultation by contacting (908) 336-5008 or filling out an online form now.