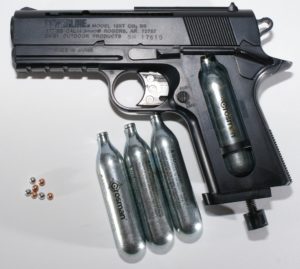 It is hard to imagine, but BB guns, paintball guns, and Airsoft guns are considered prohibited weapons in New Jersey. If you do not have a valid firearm permit or firearms ID card allowing you to carry one of these items, you could endure serious legal problems. Because NJ law makes only a slight distinction between a deadly weapon (such as a handgun) and a toy (such as a paintball gun), you may be subject to prison time if you are caught with a BB gun, paintball gun, or Airsoft gun.

NOTE: Christopher Perry was quoted as an authority on gun rights and laws in New Jersey in April 2018 in the Bergen Record.

The Tormey Law Firm is a skilled criminal defense team whose lawyers have extensive experience representing clients facing illegal gun charges, including possession of a paintball gun, illegal possession of a handgun, and unlawful possession of a weapon in East Hanover, Denville, and Dover. Because we have an office conveniently located in Morristown, NJ, we are always available to help you with your gun possession case. To get in touch with us immediately for a free consultation, call 866-949-6948.

Here is an example of a BB gun case our attorneys successfully handled in the Morris County Superior Court for one of our clients.

3rd Degree Possession of a BB Gun Without a Permit

The most common charge we see is a 3rd degree felony charge for possession of a BB gun or airsoft gun without a proper permit. That’s right, you need a gun permit in New Jersey (known as an FID card) in order to purchase and possess these weapons anywhere outside your home. If you are caught in possession of this type of weapon without the proper documentation, you will be arrested and charged with a 3rd degree felony and face the following penalties:

In addition, if this “firearm” was used to threaten someone or in a drug transaction, the charges will be upgraded to a second degree offense which can include the following penalties:

As you can see, a toy gun can lead to serious problems in New Jersey if you are arrested and caught with one without a proper permit.

Can I get PTI for a BB gun charge in Morris County?

Typically, yes. If you are a first time offender and have never been arrested or convicted of a felony or disorderly persons offense before, you should be eligible for a program known as Pre-Trial Intervention (“PTI”). This program places you on probation for a period of 1-3 years and, if you successfully complete the program, the charges will be completely dismissed. Thus, PTI allows a defendant to avoid jail time and a felony criminal charge on their record.

If you or a loved one has been charged with an illegal firearm offense in New Jersey, Travis J. Tormey can help. Mr. Tormey has had several recent successes defending clients who faced weapons charges:

Contact a Madison BB and Paintball Gun Lawyer for Answers

The fact of the matter is that possessing a BB gun or Airsoft gun, even when lawfully purchased at a flea market or a sporting goods store, can lead to a felony conviction and many years in New Jersey State Prison. If you own any of these weapons, it is imperative that you have them properly registered/permitted to avoid any future legal issues. If these legal issues have already arisen, it is crucial that you contact an experienced firearms defense attorney to combat the charges against you.

If the Graves Act is implicated, the State’s plea offer will almost certainly include state prison time. That is why it is important that you contact an experienced criminal defense lawyer for representation. The collateral consequences of a weapons charge conviction are life-altering. The Tormey Law Firm can help. Give us a call anytime day or night at 866-949-6948 for a free consultation, or you can use our online contact form.