Morris County Certain Persons Not to Have Weapons Lawyer 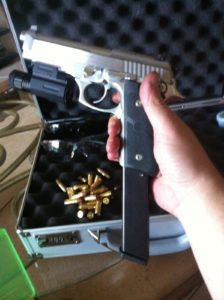 As everyone knows, the Second Amendment provides the right to bear arms. However, New Jersey state law imposes limitations on this right. Basically, the law recognizes who may possess weapons (and under what circumstances). “Certain persons” are prevented from possessing a weapon in New Jersey. Violations of this law can result in severe punishments, including up to 10 years in NJ State Prison.

NOTE: Christopher Perry of the Tormey Law Firm LLC was quoted in the Bergen Record in April 2018 as a legal authority on gun rights, permits, and gun laws in New Jersey.

The Tormey Law Firm represents clients that have been charged with criminal offenses including Certain Persons Not to Have Weapons (“Certain Persons”) throughout New Jersey, including in Parsippany, Roxbury, Denville, Dover, and Morristown. Our criminal defense attorneys have successfully handled thousands of cases in New Jersey, in Superior Court and Municipal Court. In fact, Mr. Tormey was recognized by the American Jurist Institute as one of the top 10 criminal lawyers in the State of New Jersey. In addition, Christopher Perry, who focuses his practice on firearms rights and laws, was named a SuperLawyer Rising Star in 2018 in the area of criminal defense. In cases involving weapons, the criminal defense team at the Tormey Law Firm, understands the importance of acting quickly and effectively to obtain the best possible result. Contact our offices anytime at 866-949-6948 for a free consultation.

Certain Persons Not to Have Weapons Offenses in New Jersey

Certain Persons Not to Have Weapons (“Certain Persons”) is codified under N.J.S.A. 2C:39-7. The statute stipulates that certain persons may not knowingly purchase, own, possess, or control a weapon in New Jersey. Persons prohibited from possessing a weapon include:

What Constitutes a “Weapon” Under NJ Law?

As defined by N.J.S.A. 2C:39-1, a “weapon” can be almost anything. The statute defines a weapon as any object capable of inflicting serious bodily injury. This is an extremely broad definition that can apply to almost anything, including switchblade knives, brass knuckles, stun guns, and even slingshots.

It is a fourth degree crime to possess a weapon if you have been convicted of certain violent crimes, including aggravated assault, arson, burglary, extortion, homicide, kidnapping, robbery, stalking, aggravated sexual assault, sexual assault, endangering the welfare of a child. Other predicate offenses include past weapons offenses and distributing drugs near a school zone. It is also a fourth degree crime to own a weapon if you have been declared mentally ill. Fourth degree criminal offenses are punishable by as many as 18 months in NJ State Prison.

If you’ve been convicted of a disorderly persons offense involving domestic violence, it is a third degree crime to own or possess a weapon. A conviction for a third degree felony can result in a term of incarceration of five (5) years in state prison.

Importantly, a certain persons offense may be upgraded to a second degree felony if you attempt to purchase a firearm. A second degree felony is punishable by up to 10 years in NJ State Prison. It also carries a presumption of incarceration, meaning a mandatory minimum period of parole ineligibility of five (5) years.

Being charged with a weapons offense can mean exposure to a lengthy term of incarceration in New Jersey State Prison, a large portion of which must be served without the benefit of parole. It can also mean a host of collateral consequences, such as the prohibition against weapons ownership in the future. Hiring an experienced, skilled defense lawyer can mean all the difference. The criminal defense lawyers at the Tormey Law Firm know that the consequences of a conviction for a “Certain Persons” offense can be severe. We also have advanced defense strategies that we can use to help you beat your gun charges. For instance, depending on the circumstances of your case, we may be able to challenge the legality of the search that turned up the weapon by demonstrating that the search warrant was invalid or by proving that the motor vehicle stop was unconstitutional. We will fight to limit your exposure to the greatest extent possible.

If you find yourself in a situation where you or a loved one have been charged with a weapons offense as a result of a domestic violence or other criminal incident, do not delay in hiring legal representation. The Tormey Law Firm is ready to fight for you. Contact us now at at 866-949-6948 for a free consultation about your case.