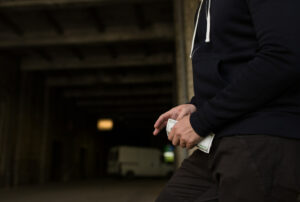 Even though New Jersey recently decriminalized recreational use of Marijuana and ended mandatory minimum sentences for certain non-violent drug crimes, the state has not softened its strict laws regarding manufacturing, distributing, and dispensing illegal drugs. New Jersey gravely punishes one who intentionally manufactures, distributes, or dispenses a controlled dangerous substance (CDS) or possesses a CDS or its analog with the intent to distribute (N.J.S.A. 2C: 35-5). One who illegally prepares, compounds, converts, cuts, dilutes, or processes a drug, including packaging or repacking it, and delivers or shares illegal drugs with others is guilty of an indictable crime of the first, second, third, or fourth degree. The penalty for committing the crime depends on the amount and type of drug made or sold. Thus, if you sell heroin, you could spend many years behind bars if caught. However, all drug distribution charges are considered felonies, which is why you need to fight the case with everything you have and preferably, with help from an experienced criminal defense lawyer, when caught in this firestorm.

The criminal defense team at the Tormey Law Firm has the talent, commitment, and grit to successfully handle your distribution or possession with intent to distribute CDS case in Morris County Superior Court in Morristown, NJ. No matter what drug is involved in your case, whether it be cocaine, heroin, MDMA, steroids, methamphetamine, LSD, marijuana, or another drug, our attorneys are prepared to assist and advocate for you. When the criminal justice system and its heavy consequences for suspected drug dealers who have been arrested in Parsippany, Madison, Chatham, Dover, Boonton, Roxbury, Rockaway, and surrounding towns is threatening to swallow you up, count on our aggressive defense lawyers to go to battle in the courtroom on your behalf. Contact our Morristown office at (908) 336-5008 to speak with a member of our team about your CDS distribution case in a free consultation.

All a prosecutor must prove to indict and convict you is to convince a jury that the substance the police confiscated from you is a CDS or its analog, which you intentionally produced, shared, or delivered to someone else. True, they must convince a jury beyond a reasonable doubt that you did those things, which is no easy task, especially when it comes to proving the intentions of another. Prosecutors cannot read minds. Instead, a prosecutor must often rely on establishing a defendant’s intent by inference through the circumstances. In other words, a reasonable person could understand that if the police saw you hand someone a package of heroin and receive money for it, you intended to distribute an illegal drug. That may differ from a scenario where the heroin package slipped from your pocket, and someone else picked it up off the ground, or you gave someone a package you did not know contained heroin.

As for possession of a CDS with the intent to distribute, the prosecutor must prove also you had actual or constructive possession. An example of actual possession is when the police search you and find the drug in hand, on your person, or in your vehicle. In contrast, constructive possession means you know the CDS exists, say in your apartment, even though it is not on your physical person. In other words, you still have control over the substance even though it is not in your physical possession. The prosecutor must also prove that the substance found on your person or the person you gave it to is a CDS and that relevant circumstances and evidence support the contention that you intended to transfer, sell, or provide it to others.

Drugs listed on federal and New Jersey Schedules I to V are considered controlled dangerous substances. Some are more dangerous than others, meaning their danger as an addictive drug outweighs their medicinal value. They are illegal drugs to manufacture, distribute or dispense in New Jersey. Thus, N.J.S.A. 2C:35-5 lists the penalties and quantities of a CDS for manufacture or sale.

Distributing 5 ounces or greater of heroin, cocaine, or methamphetamine results in a first degree crime. First degree convictions result in a 20-year maximum prison sentence and upwards of $500,000.00 in fines unless law enforcement caught you with methamphetamine. Then, your penalty is a potential $300,000.00. Between a half ounce and under 5 ounces is a second degree crime. And second degree convictions mean 5 to 10 years of incarceration and $150,000.00 in fines. Under a half-ounce is a third degree crime, which carries a 3 to 5-year sentence and a $15,000.00 fine

Moreover, first and second degree crimes carry a presumption of incarceration. The third and fourth degree drug distribution charges do not. The penalties are greater for distributing drugs with weapons or otherwise by deadly force, as well as for distribution of drugs in a school zone, on a school bus, or near a public housing project or a park.

If law enforcement arrests you on drug distribution charges, you face enhanced sentences with prior convictions. But even if it is your first time violating the statute, you stand to lose your freedom and pay huge sums if convicted. If you want to minimize your troubles, you ought to seek help from a seasoned criminal defense attorney experienced in drug manufacture, distribution, and dispensation of drug cases.

Our Morris County defense team’s job is to promote the strengths of your defense while downplaying or altogether negating the strengths of the prosecutor’s case. Whether we argue the case in front of a jury by taking your case to trial in Superior Court, obtain a desirable plea agreement and bargain your case to a resolution, or assist you with taking advantage of a diversionary program like Pre-Trial Intervention to get the charges dismissed after a probationary period, our attorneys know and vet all of your options for the best result. Call (908) 336-5008 now to consult a criminal lawyer who is up to beating the high stakes of your case.