Shoplifting Charged as Robbery in NJ 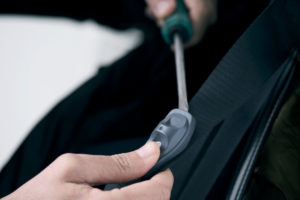 In many instances, a lesser crime like simple assault or petty theft, can escalate into a major crime with serious penalties when the unexpected occurs. For example, you angrily push someone out of the way, causing the person to fall and hit their head on the concrete, resulting in brain injury, or you shoplift a ten dollar tee shirt but get caught and the store owner chasing you falls and breaks their leg when you shove a clothing rack in front of them. The law looks on these incidences as logical effects of the lesser criminal acts to justify the greater criminal charges, such as when robbery results from shoplifting.

What is the Difference between Robbery and Shoplifting in NJ?

Robbery is distinguished from shoplifting by the element of force or the threat of using force that may cause bodily injury during the commission of or fleeing from the scene of a theft. Robbery is typically thought of as that scene in the movies when someone with a mask points a gun at a store clerk or bank teller and orders the person to hand over goods or money. But robbery can also mean a simple theft turned wrong. For example, someone shoplifting a scarf at a clothing store can turn into robbery if the store security guard that catches the shoplifter gets injured by the shoplifter’s shove or punch thrown in the heat of the moment after the chase and capture of the thief. In this case, the use of force in fleeing the theft scene results in bodily injury and is therefore robbery. It is the use of force that elevates the shoplifting crime, typically a lesser charge, to robbery, a second degree crime.

Punishments for Shoplifting vs. Robbery in New Jersey

So, if the scarf was valued at less than $200.00, the shoplifting charge alone is a disorderly persons offense carrying a sentence of 6 months in jail and a $1,000.00 fine. Shoplifting charges range from petty theft to second degree shoplifting, the difference between 6 months in jail and 10 years, and the primary factor determining whether one or the other is charged is the value of the stolen items. Petty theft is the charge if the stolen goods are valued at less than $200.00. If the stolen items are valued between $200 and $500, you may be charged with a fourth degree crime that comes with a possible 18-month prison sentence and a $10,000.00 fine, and if between $500.00 and $75,000.00, a third degree crime with a possible 5-year prison sentence and a $15,000.00 fine. Over $75,000.00 and you are looking at up to 10 years’ imprisonment for a second degree crime.

Even if the value of the merchandise stolen is just over $200.00, however, the charge may be a fourth degree crime, punishable by 18 months in prison, compared to robbery, a second degree crime punishable by 5 to 10 years in prison, a presumption of prison time, a $150,000.00 fine, and no possibility of early release, meaning a convicted felon must mandatorily serve 85% of the sentence. The punishment for a first degree robbery is 10 to 20 years in prison and a $150,000.00 fine.

Charged with Robbery after Shoplifting in Morris County NJ?

You may or may not have intended to hurt anyone, but the law is clear when injury occurs from a minor misdeed, the crime is major. Even if the shoplifter did not intend to hurt anyone, the critical ingredient between shoplifting and robbery is once again the use of force to accomplish or escape the shoplifting crime. As such, if your shoplifting spree turned into a robbery arrest in Morris County NJ, be sure to call on a criminal defense attorney well-versed in the ins and outs of theft, shoplifting, robbery, and the penalties associated with those to help you out of your bind. The penalties are serious, so you could face long prison time and expensive fines without the legal prowess of a knowledgeable and skilled defense lawyer to identify weaknesses in the prosecutor’s case against you pursue the best course of action to suit your circumstances.

It is too easy to be lulled into thinking that shoplifting is no big deal. Whether it’s shoplifting or robbery, it is a big deal, and it could cost you precious time, money, and even your freedom. Contact our local criminal defense law firm in Morristown to speak with a lawyer about your case free of charge. You can reach us anytime, day or night, by calling (908)-336-5008 or contacting us online to learn more.