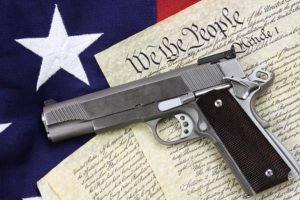 In a recent New Jersey Supreme Court decision, State v. Robinson, ___ N.J. ___ (May 1, 2017), the Court held that the protective sweep exception to the warrant requirement does not apply to motor vehicle stops when all passengers are safely secured and monitored outside of the vehicle and do not have immediate access to items in the car.  In this case, the officer conducted a motor vehicle stop and learned from the police that the driver and one passenger had outstanding warrants and a history of weapons offenses.  The officer requested backup and four more officers arrived on scene. The five officers then removed the four occupants from the vehicle and frisked them for weapons, with none of them resisting or attempting to access the vehicle.  The police then searched the interior of the vehicle and lifted one passenger’s purse to search the seat and recognized a handgun was in the purse.  The trial court denied the defendant’s motion to suppress the weapon.  However, a divided Appellate Division reversed in State v. Robinson, 441 N.J. Super. 33 (App. Div. 2015), holding that the motor vehicle search did not constitute either a protective sweep or an exercise of the police officer s community-caretaking function.

Under federal and New Jersey search-and-seizure law, a police officer’s warrantless search of the passenger compartment of a vehicle, following a lawful traffic stop, is a considered a constitutional and lawful protective sweep when the circumstances give rise to a reasonable suspicion that a driver or passenger is dangerous and may gain immediate access to weapons. State v. Gamble, 218 N.J. 412 (2014) (citing Michigan v. Long, 463 U.S. 1032 (1983) and State v. Lund, 119 N.J. 35 (1990).  However, a protective sweep is permitted only to ferret out weapons that might be used against police officers and it must be cursory and limited in scope to the location where the danger may be concealed.  The protective sweep doctrine derives from Terry v. Ohio, 392 U.S. 1 (1968). In Terry, the Supreme Court held that a police officer may initiate an investigatory stop in the presence of specific and articulable facts which, taken together with rational inferences from those facts, reasonably warrant that intrusion and that when an officer conducts such a stop, he or she may frisk the individual for weapons without probable cause for the protection of the police officer where he has reason to believe that he is dealing with an armed and dangerous individual.

Accordingly, the Court defined that standard for a valid protective sweep of an automobile following a traffic stop: “the State must present specific and articulable facts that, considered with the rational inferences from those facts, warrant a belief that an individual in the vehicle is dangerous and that he or she may gain immediate control of weapons.”  Moreover, the protective sweep exception in the automobile setting does not turn solely on the potential presence of a weapon in a vehicle but, instead, the imminent danger to police when a driver or passenger will be permitted access to a vehicle that may contain a weapon or may be in a position to evade or overpower the officers at the scene.  Thus, the Court concluded that although the circumstances gave rise to a reasonable suspicion that there was a weapon in the vehicle, the five officers’ swift and coordinated action eliminated the risk that any of the four occupants would gain immediate access to the weapon and, therefore, the protective sweep exception did not apply. Ultimately, the case was remanded to the trial court for further proceedings.

This case demonstrates the importance of being represented by an experienced weapons defense attorney if you are charged with the unlawful possession of a weapon, the possession of a weapon for an unlawful purpose, or any other weapons offense in New Jersey.  The bottom line is that no two cases are exactly the same and recognizing one key fact may make the difference between whether or not a warrant exception applies to a given situation or whether or not there was an unconstitutional search.  In cases of an unconstitutional search, evidence may be suppressed and ultimately result in dismissal of the criminal charges – but only if the issue is appropriately raised before the court. For example, Christopher Perry of the Tormey Law Firm recently had a gun suppressed and the case dismissed based on the illegal search of a motor vehicle by police officers.