Can You be Arrested for Public Intoxication in New Jersey? 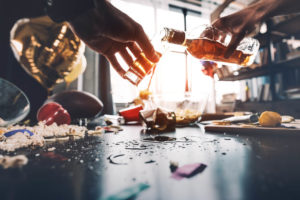 People often wonder if public intoxication can get you arrested in New Jersey. It’s not a crime to be intoxicated in a public place, and yet individuals young and old often find themselves arrested and facing criminal charges. How is this possible? Consider the following scenario. You went out with a group of friends to a restaurant, ate a good meal, and had a few drinks. The night was still young after dinner and drinks, so you decided to take a walk with your buddies down the street lined with restaurants, shops, and entertainment offerings. While looking in the window of a nearby restaurant, you and your friends pointed and laughed at patrons inside the restaurant, knocking on the window and shouting names at a couple dining inside. You and your friends were loud, using profanity, and refusing to leave the storefront window when the manager told you to leave. When the police arrived, you and your friends were charged with disorderly conduct. Admittedly you were drunk, but you probably want to know what happens from here.

Public Intoxication that Leads to Disorderly Conduct Charges in NJ

Disorderly conduct is the most common charge connected to public intoxication in New Jersey. In actuality, New Jersey does not have statewide drunk in public laws. And though each town or municipality has its own ordinances governing public nuisances and public disturbances, no city, town or borough may make it illegal to be drunk in public, according to N.J.S.A. 26:2B-26. However, it is illegal to cause a public disturbance by improper behavior or using offensive language, which violates N.J.S.A. 2C:33-2. Improper behavior includes violent threats, raucous behavior, and actions or words that cause a dangerous situation without any legitimate reason or justification for such behavior. Fighting in public is an example of improper behavior. Using offensive language, such as profanity or hateful speech intended to offend others or recklessly disregarding others’ sensibilities, is also prosecutable disorderly conduct.

Public, for purposes of legally defining public intoxication, means anywhere people gather or places that are freely accessible to anyone, like streets, sidewalks, parks, public squares, beaches, bridges, alleys, thoroughfares, plaza, shopping mall, public libraries, and other public buildings or areas, per the definition provided by N.J.S.A 2C:33-2.1. So, you can be intoxicated at home and behave in a disorderly manner, but not where other people may freely go. Even your front yard is public, so you may be charged for disorderly conduct if you are loudly, disruptively drunk on your front lawn, perhaps walking onto the sidewalk or into the street and obstructing traffic or passersby.

What are the Consequences of Being Charged with Disturbing the Public while Intoxicated?

A disorderly conduct conviction is a petty disorderly persons offense, like a misdemeanor, with a maximum penalty of 30 days in jail and a potential fine of $500.00. Further penalties may include restitution payments for property damage resulting from the disorderly conduct. Worse, however, is that the conviction becomes part of your criminal record that may restrict your employment and other opportunities that use background checks in their decision-making process. On the other hand, being drunk and disorderly when given as a municipal, borough or town ordinance violation, varies from place to place. An ordinance violation is not criminal in nature, more like a traffic ticket, but can have significant fines, and even jail time, attached to it. However, ordinances can usually be resolved by way of paying a fine and can have better impacts on your criminal record.

Got Arrested while Drunk in Public, Where do I go to Court?

Thus, you might be charged with disorderly conduct or violating an ordinance in that city because you left a restaurant and walked into the public street while drunk. In either case, you will have to appear in the local municipal court where you allegedly committed the violation. If being drunk was all that happened that night, the police might have given you an ordinance and taken you home afterwards. Believe it or not, New Jersey police are authorized to take a person drunk in public, forcefully, if necessary, into protective custody and take them home or to a treatment center (N.J.S.A. 26:2B-16) However, let’s say you created a stir in front of the restaurant, using profanity and harassing diners to make them annoyed or possibly offended, and caused the restaurant manager to call the police. You may be given a criminal summons for disorderly conduct, also a municipal court matter, though more serious than a mere ordinance violation. In either or both cases, you probably want to seek help from a criminal attorney who can explain the criminal process and the best course of action for you.

How can a Harding NJ Lawyer Help with my Public Intoxication Charge?

With legal help, you may be able to negotiate with the municipal prosecutor for a lesser offense, lower fines, no criminal record, and/or community service. If it is your first offense, you may qualify for diversionary programs like conditional dismissal aimed at rehabilitation rather than criminal conviction. If you have no prior offenses or crimes on your record, nor previously participated in other diversionary programs, you may qualify for conditional dismissal, which means you will not be sentenced and your charges will be dismissed if you complete the program. Finally, an attorney may help you get a conviction for a petty disorderly persons offense expunged from your record after five years, depending on your criminal history, and after two years for a municipal court ordinance. Talk to a dedicated criminal defense lawyer at our Morris County offices to understand your options. Whether you are expected in municipal court for public intoxication related charges in Chatham, Madison, Denville, Roxbury, East Hanover, Harding, Kinnelon, Morris Plains, or another town nearby, our local lawyers can help. Call 908-336-5008 for a free consultation and learn more.