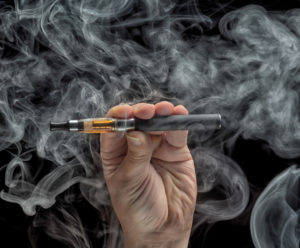 While vaping and e-cigarette use is legal when used properly in New Jersey, vape pens and electronic cigarettes can be used for illegal purposes as well. For example, vaping has become a way to ingest illegal drugs, including marijuana. Under these circumstances, charges can arise related to using or even simply having a vape pen in your possession. If you have been arrested for or charged with drug possession, marijuana, THC, or another crime related to a vape, speaking to an attorney about your rights and defense is imperative. Contact us at (908) 336-5008 to discuss e-cigarette related charges in Dover, Rockaway, Madison, Chatham, Parsippany, Mount Olive, Morristown, Roxbury, or another Morris County town. We are available around the clock to assist you in a free consultation.

How Common is Vaping?

The term “vaping” refers to using an e-cigarette to inhale vapors from nicotine, flavorings, or marijuana. It is becoming very popular with teens and young adults. In fact, a recent study indicated that nearly 40% of 12th graders admitted to vaping within the past year. This number is up from about 28% in 2017. Among those teenagers, another roughly 13% stated that they vaped marijuana as well. While highly common, the issue of vaping is a serious concern for young people. In fact, U.S. Surgeon General Jerome Adams has declared vaping to be an epidemic for youth across the nation.  Some say it causes fewer health issues compared to cigarettes or cigars, while others question whether it really is a safer alternative. Some reports even indicate that it is actually worse for your health compared to other options.

When someone vapes marijuana, they are actually vaping THC oil or marijuana wax, rather than a marijuana plant, as you would while you were smoking it. This is dangerous because there is a higher concentration of THC when only the oil is used. THC creates the high feelings involved when someone uses marijuana. According to some studies, ingesting high concentrations of THC can increase the likelihood that someone becomes addicted and the occurrence of other adverse medical issues.

In New Jersey, typical marijuana possession charges for possessing less than 50 grams fall under the category of disorderly persons offense. However, when you have THC in a vape pen, the offense may be charged as a fourth degree crime. Such a crime have the potential to result in up to 18 months in jail and a $15,000 fine.

When a person is charged with a fourth degree crime for THC in a vape pen, this classification is referred to as a “synthetic cannabinoid,” which is defined under a relatively new law that specifically targets things like THC oil and marijuana wax. Escalating vaping-related charges from typical disorderly persons offenses to indictable crimes also creates a significant increase in penalties, showing that the State of New Jersey is serious about preventing these types of crimes. While law enforcement is aggressively pursuing these cases, some cases involving marijuana and a vape pen or e-cigarette still result in simple marijuana possession charges accompanied by a separate charge for drug paraphernalia.

Drug Paraphernalia and E-Cigarettes in NJ

Possession of drug paraphernalia is a disorderly persons offense in New Jersey. These charges have a maximum penalty of $1,000 and up to six months in the county jail. If your vape pen shows signs that it had THC oil or marijuana wax in it at one point, the State may charge you with possession of drug paraphernalia, even if you are not using your vape pen for that purpose when an officer became involved. You can face this charge with or without a separate container of marijuana or THC; all the state needs is some residue in a vape or e-cigarette to charge you with this offense.

Even if you are not vaping yourself, you can be charged with a criminal offense related to electronic cigarettes and vape pens. New Jersey law prohibits the sale of tobacco products to anyone under the age of 21. The state increased the age requirement from 19 to 21 in 2017. Making tobacco available to anyone under 21 is also generally a crime, even if you are not selling it. This restriction includes products related to vaping.

If you or a loved one has been charged with any crime related to electronic cigarettes and vaping, get legal help right away. Even if this is your first offense, it can go on your record and haunt you for years to come. Do not risk that type of long-term consequence and try to fight the charges alone. Call the team at our criminal defense firm in Morristown, NJ for more information on how we can help. You can reach us by calling (908) 336-5008 anytime and one of our lawyers will provide you with a free consultation.

« BAC under 0.08%? You May Still be Charged with DWI in NJ
Morris County Final Restraining Order Appealed and Overturned Thanks to Travis J. Tormey »